Many dental restorations and appliances are constructed outside the patient’s mouth using models and dies which should be accurate replicas of the patient’s hard and soft tissues.

The morphology of the hard and soft tissues is recorded in an impression and models and dies are prepared using materials which are initially fluid and can be poured into the impression, then harden to form a rigid replica.

WHAT IS A MODEL? WHAT IS A DIE?

Model: is a replica of several teeth and their associated soft tissues or, alternatively, to an edentulous arch.

Die: is a replica of a single tooth.

Many materials have been used for producing models and dies but the most popular are the materials based on gypsum products.

Requirements of Model and Die Materials

The model and die materials ideally, should:

Gypsum products used in dentistry are based on calcium sulphate hemihydrate (CaSO4)2·H2O. Their main uses are for casts or models, dies and investments.

Gypsum products used in dentistry are formed by driving off part of the water of crystallization from gypsum to form calcium sulphate hemihydrate.

MANUFACTURE OF PLASTER aka PLASTER OF PARIS  “POP”

Plaster is produced by a process known as calcination. Gypsum is heated to a temperature of about 120̊ C in order to drive off part of the water of crystallization. This produces irregular, porous particles referred to as β-hemihydrate particles.

Overheating the gypsum may cause further loss of water to form calcium sulphate anhydrite (CaSO4), whilst underheating produces a significant concentration of residual dihydrate. The presence of both components has a marked influence upon the setting characteristics of the resultant plaster.

Dental stones may be produced by one of two methods:

Gypsum model and die materials have the advantages of

Stones are normally used when strength, hardness and accuracy are required. These materials are used when any work is to be carried out on the model or die as would be the case when constructing a denture on a model or a cast alloy crown on a die.

The cheaper dental plaster is used when mechanical properties and accuracy are not of primary importance. Thus, plaster is often used for mounting stone models onto articulators and sometimes for preparing study models.

Plaster and stone powders are mixed with water to produce a workable mix. The table illustrates Water/Powder ratios for gypsum model and die materials.

Excess water is absorbed by the porosities of gypsum particles. 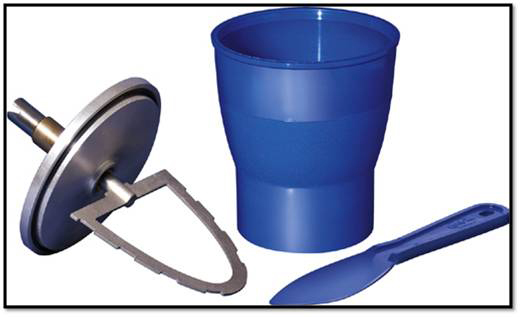 The presence of gypsum residues in the mixing bowl can noticeably alter the working and setting characteristics of a fresh mix and so the need for cleanliness is emphasized.

Considerable quantities of air may be incorporated during mixing and this may lead to porosity within the set material.

Air porosity may be reduced either by:

Two stages can be identified during setting.

The time at which the material develops the properties of a weak solid and will not flow readily. At this time, it is possible to carve away excess material with a knife.

The time taken to reach a stage when the models or dies are strong and hard enough to be worked upon. The term is misleading since it implies that the material has reached its ultimate strength, which is reached several hours later.

A) Factors controlled by manufacturers

B) Factors under the control of the operator 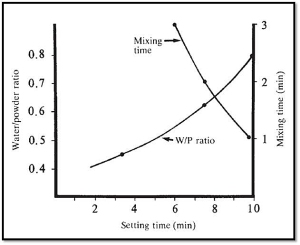 The setting reaction is exothermic, the maximum temperature is reached during the stage when final hardening occurs. Temperature rise is negligible at the time of the initial set. 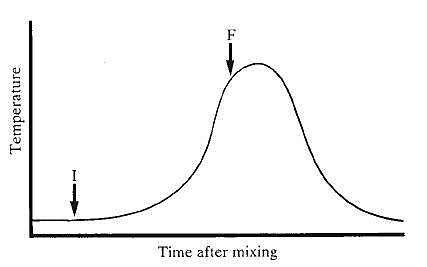 Temperature–time profile for a gypsum material during setting. Points I and F correspond to the initial set and final set points indicated by indentors

The magnitude of temperature rise depends on the bulk of material used and can reach 30̊ C at the centre of a mass of setting material. This may be maintained for several minutes due to the thermal insulating characteristics of the materials.

This marked rise in temperature can be used to good effect when flasking dentures since it softens the wax of the trial denture and enables it to be easily removed from the mould.

A small expansion caused by the outward thrust of growing crystals. The maximum rate of expansion occurs at the time when the temperature is increasing most rapidly. The expansion is only apparent since the set material contains a considerable volume of porosity.

In order to produce an accurate model or die it is necessary to maintain the setting expansion at as low a value as possible.

Accelerators or retarders which are added by manufacturers to dental stones in order to control the setting time also have the effect of reducing the setting expansion and are sometimes referred to as antiexpansion agents.

Alterations in W/P ratio and mixing time have only a minimal effect on setting expansion.

If the material is placed in water at the initial set stage, considerably more expansion occurs during setting.

This increased expansion is sometimes used to increase the setting expansion of gypsum-bonded investment materials.

Properties of the Set Material

The strength of gypsum depends on:

The porosity, and hence the strength, is proportional to the W/P ratio. Since stone is always mixed at a lower W/P ratio than plaster it is less porous and consequently much stronger and harder.

Although a gypsum model or die may appear completely set within a relatively short period its strength increases significantly if it is allowed to stand for a few hours.

The increase in strength is a function of the loss of excess water by evaporation. It is thought that evaporation of water causes a precipitation of any dissolved dihydrate and that this effectively cements together the crystals of gypsum formed during setting.

Gypsum is a very brittle material.

Plaster is fragile with very low value of flexural strength. Stone is less fragile but must be treated with care if fracture is to be avoided. It is relatively rigid but has a poor impact strength and is likely to fracture if dropped.

The dimensional stability of gypsum is good.

Following setting, further changes in dimensions are immeasurable and the materials are sufficiently rigid to resist deformations when work is being carried out upon them.

Solubility increases with the temperature of the water and if hot water is poured over the surface of a plaster cast, as happens during the boiling out of a denture mould, a portion of the surface layer becomes dissolved leaving the surface roughened.

Frequent washing of the surface with hot water should therefore be avoided.

The ability of dental gypsum products to reproduce surface details of hard or soft tissues either directly or from impressions is central to their suitability as model and die materials.

View all posts by dentulous32wmt